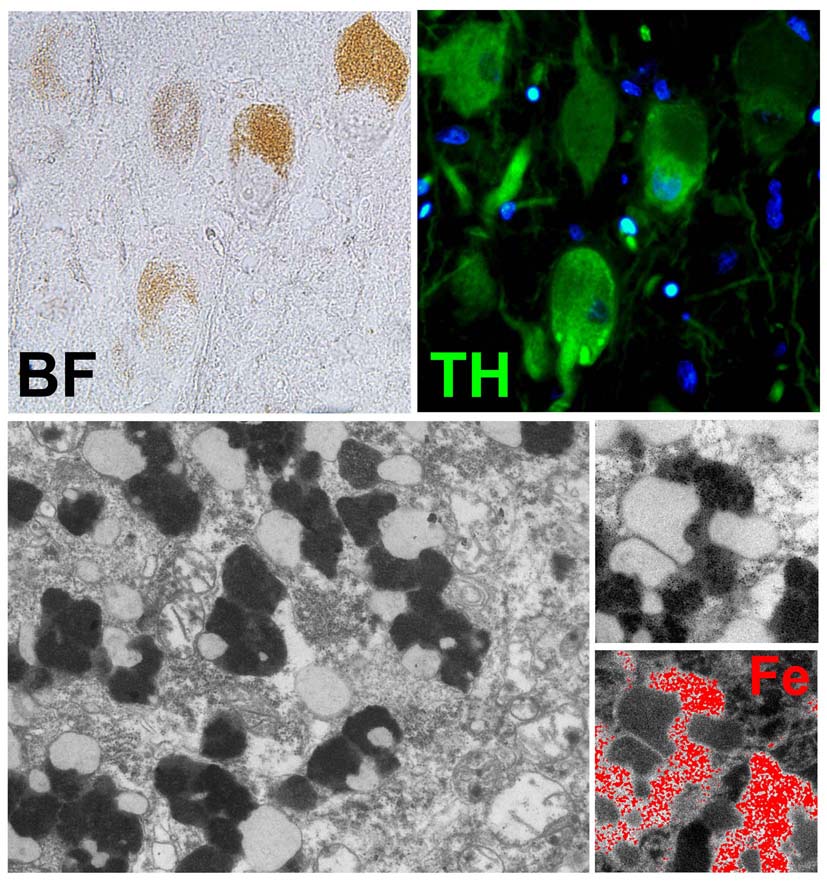 The laboratory has developed studies over the last years on the mechanisms of brain aging and neurodegeneration, particularly those involving the intraneuronal pigment known as neuromelanin.

This pigment is stored inside specific organelles along with proteins, lipids and metals and mainly accumulates as a function of age in dopaminergic and noradrenergic brain areas that selectively degenerate in Parkinson’s and Alzheimer’s diseases. The aim of research activity is then the study of structure, biosynthesis and interaction of neuromelanin with metals, as well as its role in mechanisms of brain aging and neurodegeneration.

Study of the role of neuromelanin and metals in brain aging and in neuroinflammatory and neurodegenerative mechanisms of Parkinson's disease.

The research activity focuses on the study of biosynthetic mechanisms of specific intraneuronal organelles containing neuromelanin, proteins, lipids and metals. It is important to understand the role of these organelles that accumulate inside neurons during aging and their influence on neuronal vulnerability.
Although the accumulation of neuromelanin in brain aging occurs in various brain areas, the most heavily pigmented ones are those that selectively degenerate during Parkinson’s disease. Since aging is the main risk factor for the disease, it is important to study these cellular mechanisms and their correlated alterations in brain aging that could increase neuronal vulnerability.

Design and synthesis of structural analogues of human neuromelanin.

The characterization of human neuromelanin allowed the design and synthesis (in collaboration with other groups) of various synthetic neuromelanins mimicking the structure of human brain pigment. Neuromelanin models were prepared by mixing main elements of human neuromelanin: melanic portion derived by catecholamines, proteins and iron ions.
These new compounds may have dual application:

Study of neuromelanin as marker of neuronal degeneration by means of imaging techniques.

Recently, neuromelanin-sensitive magnetic resonance imaging techniques have been found to provide notable contrast between substantia nigra and locus coeruleus (regions with highest levels of neuromelanin content) and the surrounding brain areas. These new techniques can provide semi-quantitative data on the physiology of brain areas differently affected during the disease, with different degrees of neuronal death (then neuromelanin depletion), and therefore can be used to early diagnose Parkinson’s and Alzheimer’s disease.